Citrus leaf miner (Phyllocnistis citrella) is a common pest during summer and autumn affecting all citrus. The larvae tunnels in the leaf, forming a squiggly silvery window pattern. When it’s fully grown, it curls the edges of the leaf together and pupates to emerge as a small moth about five millimetres in length. The moth is only active at night, so it’s rarely seen and its lifecycle may take as little as three weeks. The leaves often become severely distorted, which can stunt growth and reduce yield, but rarely kill a tree. Damage is normally on new sappy growth and can be controlled by cutting off and destroying the damaged parts. For citrus in pots you can try simply squeezing leaves between your thumb and forefinger to kill the larvae within the leaf. Citrus leaf miner like warm weather, so fertilise citrus at the end of autumn and in early winter so the new growth won’t be attacked. During warm weather, you can also protect new growth by spraying with an oil spray, similar to that for scale. Female moths tend to avoid leaves sprayed with plant based horticultural oil. 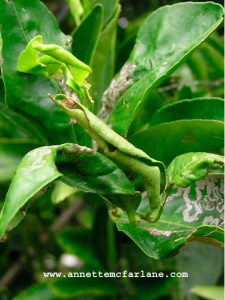 Homemade Pest Oil Spray
Mix 500ml of vegetable oil
½ cup of Sunlight dishwashing liquid or other pure liquid soap
Blend thoroughly and seal in a clean, clearly labelled jar. Store in a cool area for later use.
Dilute one tablespoon of the concentrate into one litre of water before spraying.

Oil based mixtures can be used to suffocate mites, scale and other soft bodied insects. They help to repel leaf miner moths and some gardeners even find them effective against grasshoppers. Avoid using on plants with hairy leaves and during very hot weather.