Edible plants that will grow in partial shade

We all know that most garden crops want as much sun as possible. Tomatoes, melons and peppers will positively pout if they don’t get oodles of light. What you may not realise is that many other garden crops will do sufficiently well with limited sunlight. 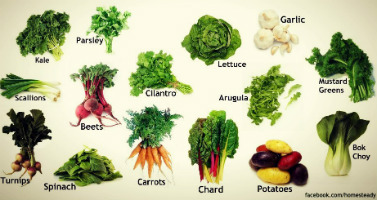 Which plants will put up with lower light levels?
A general rule is that plants grown for their stems, leaves or buds generally tolerate light shade fairly well. Those grown for roots or fruits tend to need more sun. That said, even many of these crops will also tolerate light shade, simply providing smaller yields. These are noted on the list with an asterisk (*).

The following crops will grow with as little as three to six hours of sun per day, or constant dappled shade. While size or yields may be affected in some instances, taste will be just as good.

Keep in mind:
If trees or other plants are the source of shade, garden plants may not only have to compete for light but also nutrients and water. The amount of shade may vary by the seasons when the angle of the sun is different. Study your land carefully and see if sunlight is a bigger or smaller problem than you may have thought throughout the seasons.

Bright and light surfaces nearby (such as white fences or walls) can increase the amount of light plants get.

Morning shade and afternoon shade differ in their effects on garden plants. Some cool season vegetables may actually prefer lots of morning sun and then shade during the hot summer afternoons. Areas with partial shade in the afternoon can also extend the growing season for some cool season crops that are prone to bolting during higher heat, such as lettuce.

Pay attention to air circulation. Walls and branches can block air flow, allowing moisture to build up and encourage some diseases. Plant crops with more space between them in shady areas, and be careful to water around the root area and not soak leaves from above.

It’s even more important to keep weeds at bay for shade crops that are already competing for light, water and nutrients in less than ideal conditions.

Pruning nearby trees and bushes can dramatically help increase sun exposure. Light is more important in winter, when we have shorter growing seasons and cooler temperatures.