The Glebe Garden Club (Ipswich) was formed in November 1999. While it is an outreach ministry of the Glebe Road Uniting Church, Eileen Street, Booval, it’s primary role is that of a community garden club servicing the community and open for anyone in the community to join and become a member. The club operates in a relaxed and friendly atmosphere, is multifunctional in its activities and does not specialise in any particular area or plant species. It is a general garden club!

The club got its name from the term “Glebe” – that being an old term originally used to describe a plot of ground used to grow garden produce. It was also used to describe land granted to a clergyman as part of his benefice – an old practice of providing a permanent income for particular church positions. History has it (1880) that there was such a “Glebe” situated on Glebe Road in Ipswich – at the time known as Albert Street. “Glebe”, being tied to the ground and that the Uniting Church is on Glebe Road, the Glebe Garden Club (Ipswich) was given its name. 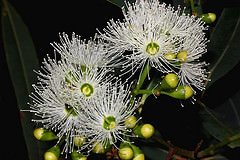 Eucalyptus curtisii, or Plunkett Mallee, is a small tree that is native to Queensland in Australia. It is a mallee eucalyptus that grows from 2 to 7 metres in height and has smooth, grey bark that peels in long strips. The adult leaves are 6 to 13 cm long and 10 to 25 mm wide. It has prominent creamy-white flowers that appear in late spring. Its natural distribution is within a limited area in the south-east corner of Queensland. The common name refers to Plunkett, which is a locality to the north of Mount Tamborine. The species is named for Densil Curtis who came across the tree while obtaining botanical samples within its range in 1923.

It was adopted by Ipswich City Council as a floral emblem in 1996.

The focus of the club has, and will always be, people. Because the club involves members from many walks of life, it is totally focused towards the sensitivity of its members. It is often in sharing and working alongside others that the greatest bonds of friendship are built, and meaningful dialogue takes place. Visit our Club Events page for upcoming club meetings. You are most welcome at the Glebe Garden Club!